True speed in a classic car is seriously hard work

Let’s make one thing clear: driving anything fast is not, by any stretch of the imagination, easy. Naturally, car tech and the science of speed have progressed substantially since the heroes of the Goodwood Revival were in their prime. An unfortunate side effect of these advancements is that the work and skill required to drive the cars has become less apparent. No less real, mind you, and perhaps more mental, but less obvious.

Watch an onboard from any recent Nürburgring lap record, and pay attention to the driver’s hands. You’ll see the occasional steering correction, but for the most part, it’s a point-and-shoot ordeal.

Perhaps that’s part of the reason why the Revival stirs something in our souls. Take a look at this onboard footage of racer and journalist Dickie Meaden in a classic ’60s Mini from a race earlier this year. The skinnier tires, softer suspension, and weaker brakes conspire to make Meaden’s hands look more like he’s a boxer working out on a heavy bag than a driver piloting the car through a packed field of similarly aged metal. 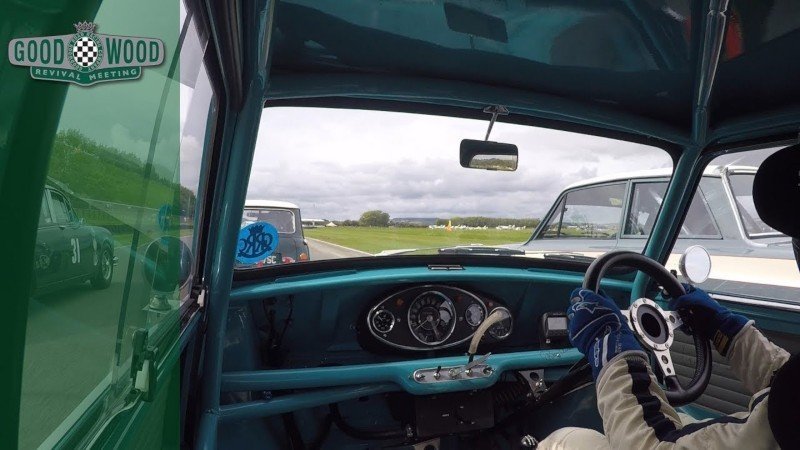 Modern technology and advancements in key performance areas—suspension, tires, brakes, and engines—have removed some of the sensation of speed. The theater of the whole thing tends to suffer, as well. When the cars are hanging their rears out through turns, writhing around in the braking zone, and generally acting disinterested in going straight, the spectacle of racing becomes more evident, even to those without an eye for what to watch for.

Take a gander at the clip above. In it, a gorgeous Ferrari 250 SWB is mercilessly thrown to-and-fro on track, backing into corners and doing its best to slide at least two tires at all times. It’s also slicing and dicing with other titans of the era, like the Jaguar E-Type and the Aston Martin DB4 GT. The cars are rarely ever pointed straight, and true speed is achieved not from an inch-perfect braking point or an ultra-precise turn-in angle, but from delicately putting the car up on its toes and dancing it around the track.

From the outside, it’s apparent that a wrestling match is taking place—and we’re here for it.