This streamlined Fiat 508 CS Balilla Berlinetta was built 85 years ago especially for the Mille Miglia, but never drove it. It was about time to change that. 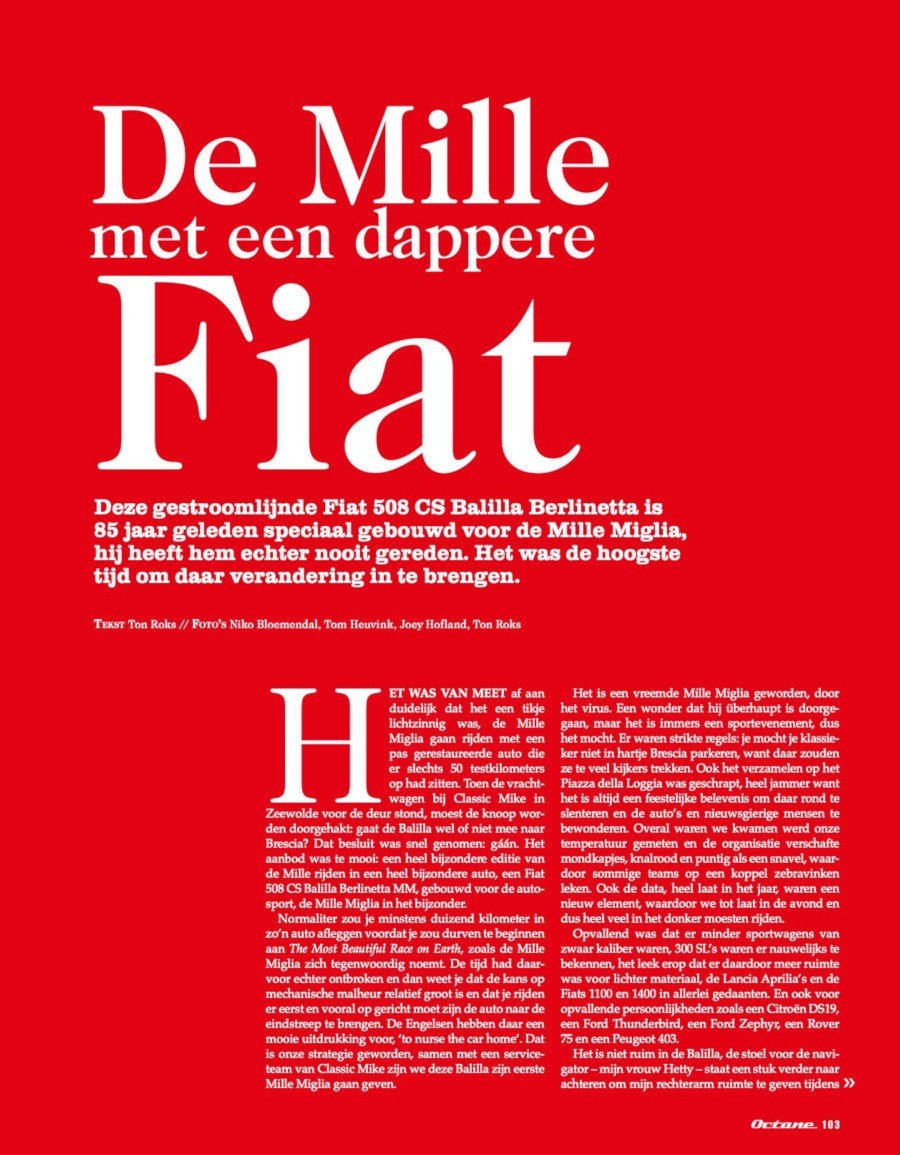 It was clear from the start that it was a bit frivolous, driving the Mille Miglia with a newly restored car that had only driven 50 test kilometers. When the truck arrived at Classic Mike’s door in Zeewolde, the decision had to be made: is the Balilla going to Brescia or not? That decision was quickly made: go. The offer was too good: to drive a very special edition of the Mille in a very special car, a Fiat 508 CS Balilla Berlinetta MM, built for the auto sport, the Mille Miglia in particular.
Normally you would drive at least a thousand kilometers in such a car before you dared to start The Most Beautiful Race on Earth, as the Mille Miglia calls itself today. However, there was no time for that and then you know that the chance of mechanical failure is relatively large and that your driving should first and foremost be aimed at bringing the car to the finish line. The English have a nice phrase for that, “to nurse the car home”. That has become our strategy, together with a service team from Classic Mike we are going to give this Balilla its first Mille Miglia.

It has become a strange Mille Miglia because of the virus. A miracle that he continued at all, but after all it is a sporting event, so it was allowed. There were strict rules: you were not allowed to park your classic in the heart of Brescia, because they would attract too many viewers there. The gathering in the Piazza della Loggia was also canceled, which is a pity because it is always a festive experience to stroll around and admire the cars and curious people. Everywhere we came our temperature was measured and the organization provided mouth masks, bright red and pointed as a beak, which by some teams looked like a couple of zebra finches. The dates, very late in the year, were also a new element, which meant that we had to drive until late in the evening and therefore a lot in the dark.
It was striking that there were fewer heavy-caliber sports cars, 300 SLs were hardly to be seen, it seemed that there was more room for lighter equipment, the Lancia Aprilias and the Fiats 1100 and 1400 in all kinds of guises. And also for striking personalities such as a Citroën DS19, a Ford Thunderbird, a Ford Zephyr, a Rover 75 and a Peugeot 403.
It is not roomy in the Balilla, the seat for the navigator – my wife Hetty – is a bit further back to give my right arm space when steering. 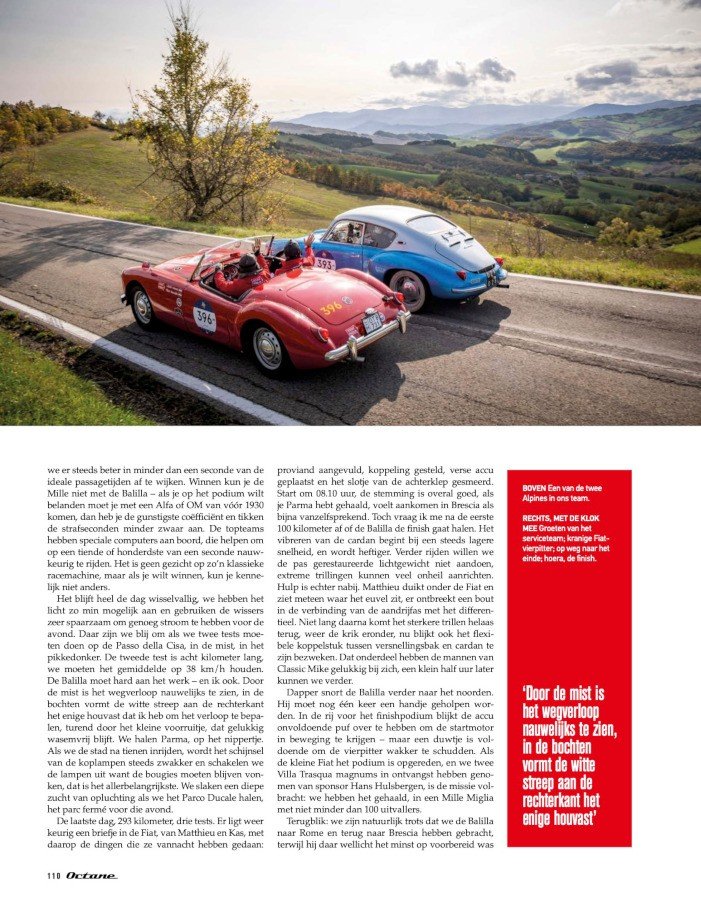 Without the men of Classic Mike that would not have been possible, they have at least as many reasons to be proud as we are. A brave car, that’s the Balilla, just like the young man from Genoa after whom it is named: the brave Giovanni Battista Perasso, nicknamed “Balilla”. In 1746 he had the guts to throw stones at an Austrian officer, unleashing a revolt against the occupying forces. Balilla has always been revered by the Northern Italians in the centuries since.
This was my fourth Mille Miglia, I previously drove or navigated it in a BMW 328, Jaguar XK120 and Aston Martin DB2, cars from the top tier of the previous field. This Mille was very different, mainly because of the Balilla. The little Fiats filled the starting fields of the Mille Miglia for three years: among the 85 participants in 1933 were no less than thirty Balillas. In 1934 they were thinner, but in 1935 there were 38 of a total of 100 participants. They were driven by car enthusiasts who wanted to try their luck in a world class race. Those 1930s adventurers were at the heart of the great race back then, embodying its true spirit perhaps more than the sports guns and top riders at the front. It was great to experience the Mille as they must have done then – I now feel like I have ridden the real Mille Miglia. Most importantly, however, we have crowned the existence of “our” Balilla 508 CS Berlinetta MM: it has ended
the Mille Miglia, 85 years after Fiat
specially built for that.