The best long-distance car rallies across the globe

From epic off-road slogs to vintage street trundles, we look at the best long-distance motor car rally races around the world. 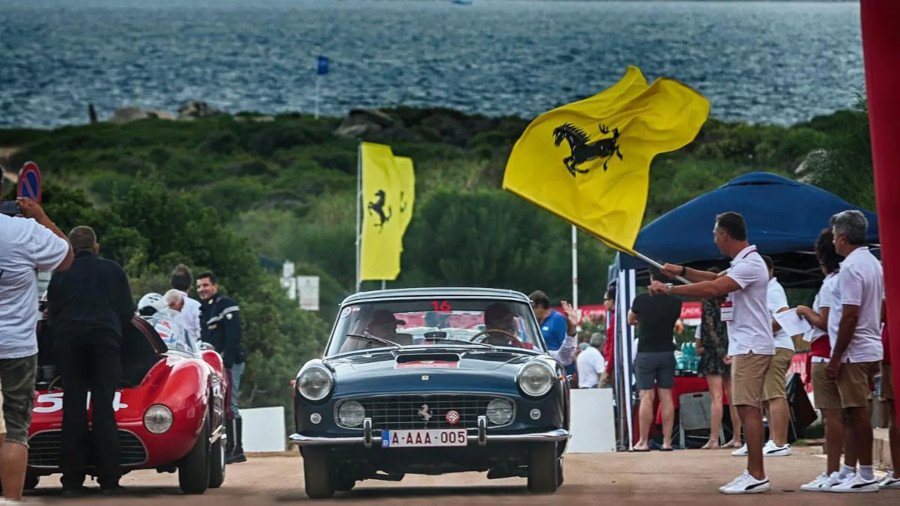 Where: Various routes through the finer parts of Italy
Who goes: Ferrari lovers and collectors
What to drive: A classic – a 340 America from 1950 would do nicely
Endurance/difficulty: 2/5
Great if… you love Ferraris and good food

What do you do if you have a Ferrari 250 GT SWB California Spyder worth around £15 million lying around, itching to be driven? Simple – you secure a ticket to the annual Ferrari Cavalcade Classiche, launched in 2017 to celebrate the maker’s 70th birthday. You’ll need to be invited, but the prestige and provenance of a car like that should get you through the door. In only its third year, the rally is already achieving cult status with a pristine line-up of classic Ferraris, many restored and maintained by the manufacturer’s Classiche department in Modena. Expect a warm, friendly group of knowledgeable global owners – more than 20 countries were represented last year. A German husband-and-wife team came along in their 250, but made it a family a air with their son and daughter making up a separate entry in a baby Dino. Two brothers originally from Belfast, having sampled the first event in a 265 GTB, decided to upgrade for 2018 in a spectacular 750 Monza. The event followed the outstanding coastline of northern Sardinia and the Costa Smeralda. There were themed dinners with a helping of local culture – Sardinian dancers, black berets and lashings of hams, cheese and a glass of the (always good) local wine. 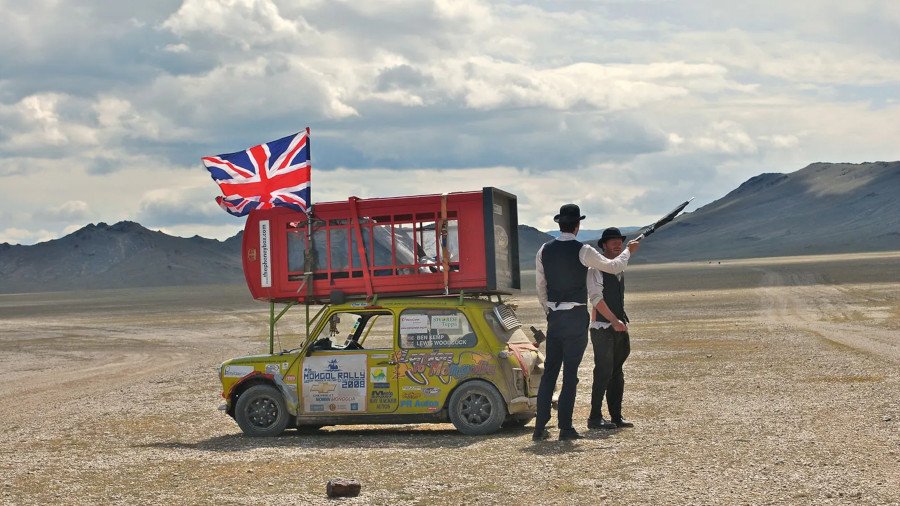 Where: The Czech Republic to Ulan Ude in Eastern Siberia, via any route
Who goes: A madcap eclectic mix – fancy dress is encouraged
What to drive: Small, humble one-litre cars – a Mini, perhaps?
Endurance/difficulty: 4/5
Great if… you and your friends fancy an alternative mini-break

Almost the same course as Peking to Paris, only in reverse and with ordinary cars: you can take whatever route you want, but many group together for support. It’s a tongue-in-cheek retort to the more traditional events – a budget “un-route” rally. Don’t let that detract from the fun factor, as the Mongol Rally is high on high jinks – a real-life version of the Wacky Races. Expect fancy dress and decorated vehicles as the entrants make light of what is still a genuinely tough challenge. The organisers’ mantra is: “If it’s not dangerous and you aren’t lost, you’re not on an adventure.” The “Warning” section of the website reads: “Your chances of being seriously injured or dying as a result of taking part are high.” We’re not sure if they are joking, but you get the picture… and it is all for charity.

Where: Mexico
Who goes: Serious racers and adrenaline junkies
What to drive: Cars made before 1972 – if you’re serious, a Studebaker, the most successful manufacturer of the modern era. Endurance/difficulty: 4/5
Great if… you like mariachi bands serenading your arrival

Originally created to showcase Mexico’s recently completed Pan-American Highway to the world in 1950, La Carrera has become a staple of the automotive calendar since it was relaunched in 1988. Its name has inspired car models (Porsche) and watches (Tag Heuer) that want to emulate the challenge, speed and allure of the event. The police and army will be on hand for closed-off sections of road to allow high-speed racing, but there are varying levels of driver catered for, from hardcore racers to classic-car collectors wanting to test their skill in one of the most exhilarating – and dangerous – races on the planet.

Where: Brescia to Rome and back
Who goes: Motorsport legends and glitterati
What to drive: Vehicles made no later than 1957 – a Mercedes-Benz 300SL Gullwing wouldn’t look out of place
Endurance/difficulty: 3/5
Great if… you like to be cheered on by locals

After starting life in 1927 as part of the competitive motorsport calendar, the Mille Miglia morphed into a “regularity” rally in 1977 for classic and vintage cars. The regularity aspect requires entrants to drive segments of the course in a specified time at a specified average speed – harder than it sounds at around 1,000 miles (1,600km) in 48 hours. It boasts one of the most impressive line-ups of any event, but it is no show-pony parade, more a genuine skill and endurance test. That said, your energy levels will be buoyed by the constant line of enthusiastic locals who greet this automotive invasion of their roads in a way unimaginable in other countries. Possibly the coolest aspect of the event is the presence of smartly dressed Italian police encouraging you to run red lights at high speed – but you’ll have to go some lengths to match the feat of Stirling Moss and co-driver Denis Jenkinson, who completed the course in 1955 at an incredible average speed of 157km/h. We won’t argue with Enzo Ferrari, who called it “the most beautiful road course on Earth”.

The Run to Monaco

Where: The Swiss Alps to the Monaco Grand Prix
Who goes: Bacchanalian Formula One fans
What to drive: Anything, as long as it’s exotic and limited – such as a Bugatti Divo
Endurance/difficulty: 2/5
Great if… you like F1, yachts and parties

The Run to Monaco is the most exclusive and expensive of the new wave of “glamour” rallies that give owners of the nest supercars a reason to dust off their impressive vehicles and show them off with like-minded fellow competitors. In this case it’s a high-octane cultural tour to the Mecca of motoring hedonism, the Monaco Grand Prix. Starting at a different European city each year, the rally meanders its way to Monte Carlo over five days of beautiful roads, parties and people. Any tiredness will be self- inflicted as the nightly events are as extravagant as the cars and hotels – and don’t expect to rest at the end, as the finish line is aboard a superyacht in Port Hercules for a weekend celebrating the Formula One race in the principality.

Where: From London to Brighton, UK
Who goes: Veterans in period dress
What to bring: Anything pre-1905 – an 1898 Panhard et Levassor… if you have one in your garage
Endurance/difficulty: 3/5
Great if… you like Chitty Chitty Bang Bang and have only a day to spare

Not just old cars, but seriously old cars take part in the London to Brighton, the original horseless rally. One of the world’s oldest motorsport events, it is 123 years since its first run. Starting in order of age from Hyde Park and passing some of London’s most iconic landmarks (some actually younger than the cars), before a 96-kilometre trip south to the coastal city of Brighton. The event has a Victorian feel to it, with drivers and riders in period dress. It was originally run to celebrate the Locomotives on Highways Act 1896, which meant cars no longer required a person to walk in front with a red flag. In a dramatic flourish, a red flag is ceremonially burned at the start of each event. Despite the short route, it is still a huge challenge owing to the age of the vehicles. Cars are steered by a tiller rather than a wheel and use candles instead of headlamps… and, of course, there’s also the British weather to contend with…

Where: Peking to Paris
Who goes: Phileas Fogg-style adventure-seekers
What to drive: Cars made before 1976 – a 1907 7.4-litre Itala would fit the bill
Endurance/difficulty: 5/5
Great if… you’ve got more than a month free for a grand exploit

This is an epic adventure straight out of an H Rider Haggard novel. Despite its infrequent running, the Peking to Paris has cemented legendary status as the grande dame of road rallies, owing to its sheer scale and difficulty. The first race originated from a challenge laid down by a Parisian newspaper in 1907 to test the newfangled automobile and was won by Prince Scipione Borghese and his chauffeur Ettore Guizzardi. The 16,000-kilometre-plus journey takes more than a month, taking in the Mongolian steppes, Gobi Desert and the Swiss Alps before arriving in the French capital. You will amass a pile of Instagram images along the way, yet this is no picnic. The winner gets a bottle of champagne… and endless bragging rights.