The 2022 Mille Miglia: Chasing Cars And Memories Across A Thousand Miles Of Italy

Il Sorpasso (The Overtaking). An Italian film co-written and directed by Dino Risi, starring Vittorio Gassman and a very young and still somewhat shy Jean-Louis Trintignant (who passed away last week, may he rest in peace). It was released in 1962, at the peak of an era full of optimism, when Italy was bravely emerging from the rubles of the war to once again become an industrial powerhouse. It was when dolce vita was coined.

It was a time when cars played a central part in the lifestyle of the affluent few, just as much as they did in the dreams of the many who were saving up for their first Fiat 500. In the film, Gassman is initiating Trintignant in the luxurious and adrenaline-infused lifestyle of a playboy. It’s a satirical kind of comedy, but one that also pays some homage to its subject matter instead of just poking fun at low-hanging fruit. The story ends with one attempted overtake too many, which results in Trigntingnant’s character being killed. Thankfully, the real Jean-Louis would go on to live on and shoot some 200 more movies in his life, as well as race cars on a few occasions—honoring his family tradition, which included a works Bugatti and a Formula 1 racer. 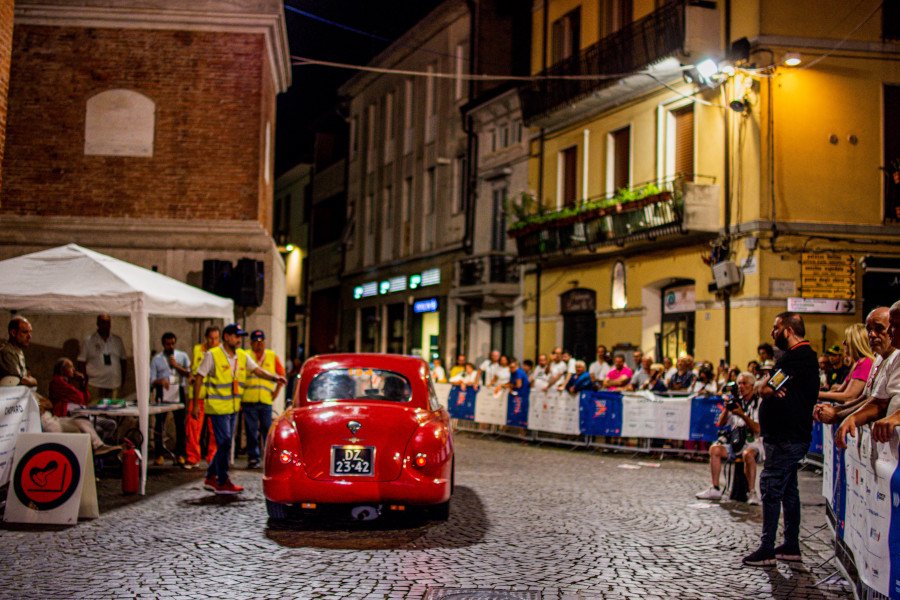 During this year’s Mille Miglia—the fortieth edition of the modern version of the original 1000-mile road race—I was overtaking an Aston Martin DB2  in my press car in order to try to keep up with a Jaguar XK120 that was following a Gullwing venting its cockpit by driving with its doors open through the center of yet another picturesque town. At that moment, I realized that the whole competition was like one giant classic film sequence, stretching a thousand miles across the beauty of Italy.

The Mille Miglia is often called the most beautiful race in the world, and while it’s not exactly an out and out race, the aesthetic elements are truly unbeatable.  So it’s a pretty accurate description, but even with the hyperbole I think it’s still an understatement to simply call it beautiful. There are lots of beautiful places in the world, after all. This is a kind of beauty that goes beyond what the eye can see. It’s cliché to say this, but the energy and atmosphere are what make this so special.

There is a lot of parading and fanfare and let’s be honest, showing off, but there’s also something that seems to stave off any cynicism that might otherwise be easily aimed at events like this. It’s exclusive, expensive, there are police escorts and modern supercars aplenty, but the Mille Miglia is still eminently lovable. The locals of the big cities and small villages alike lined the streets we passed through, and they cheered for everyone: the competitors, mechanic crews, the police, the media teams in everyday cars, civilians who got wrapped up in the midst by mistake, it didn’t matter, we were all just happy to be there regardless of why 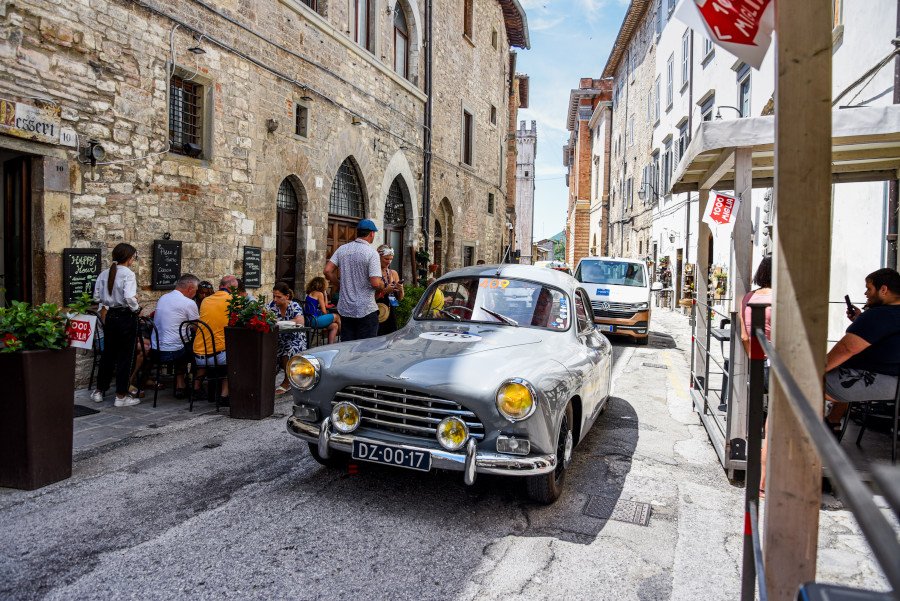 As you might expect, at first such treatment by strangers feels a bit embarrassing, especially from behind the wheel of a modern car that’s only there to capture the real show. But on second notice, it seems to me that the bystanders made a revealing observation. The Mille Miglia is not just about the cars. It’s a swarm of activity, an excuse to celebrate in the streets with your friends and neighbors. And after the last few years, it seems more than just fun but somehow crucial.

Departing its from the start/finish hub in Brescia, the Mille Miglia takes the character of one single entity. One feeling, one aim, one attitude. Every car, every spectator, every driver, and every child waving a flag are part of a whole. Each one, in perfect harmony with the rest. Some are posers, some are the realest of deals. Some are curious locals wondering what’s going on outside their front window, others have flown around the world to be here. They all add up to a singular experience across a thousand miles. 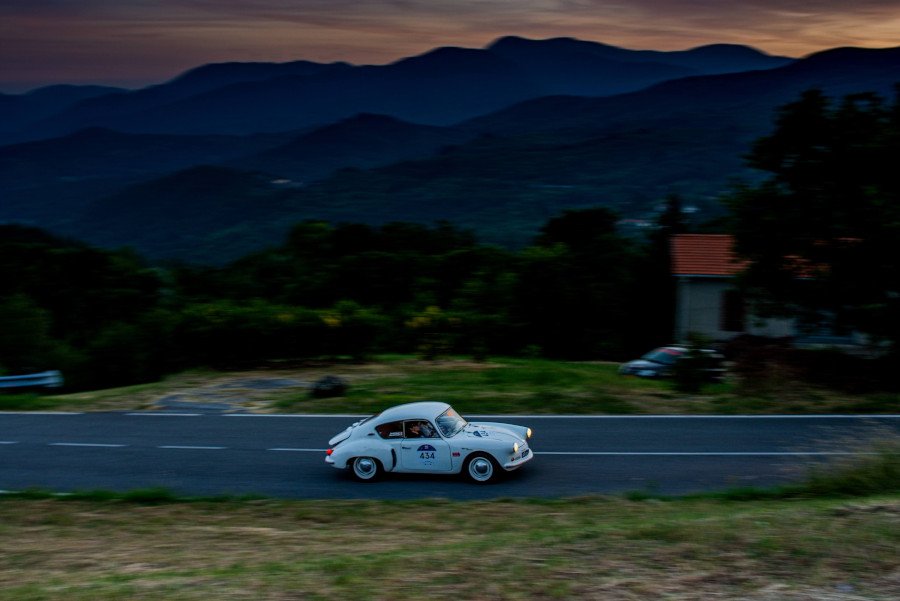 And, in typical Italian fashion, the inherent chaos of such a massive road rally is handled with an elegance that belies the amount of moving parts, and somehow the whole cadre of cars and their support teams make their journey with the ease and confidence of a spoon carving through tiramisu. The bow wave of the race lifts the mood of every street corner it crosses, one at a time, from the 6AM daily departure time (except for the start, that takes place, according to tradition, at around 1:30 in the afternoon), to way past midnight, when the last of the competitors make it to the day’s finish line.

If I found it hard to get enough sleep, I can just about imagine how it feels for the mechanics, whose jobs practically never ended during the four days of travel. Having unrestricted access to Italian espresso—served without fail with a wide smile every time—certainly helps keep things moving, and with nearly every vista being wallpaper-worthy it’s not that hard to keep your eyes open. Every bill must be paid, though, and when it’s all over the lack of sleep and the puppet strings of caffeine come crashing down. 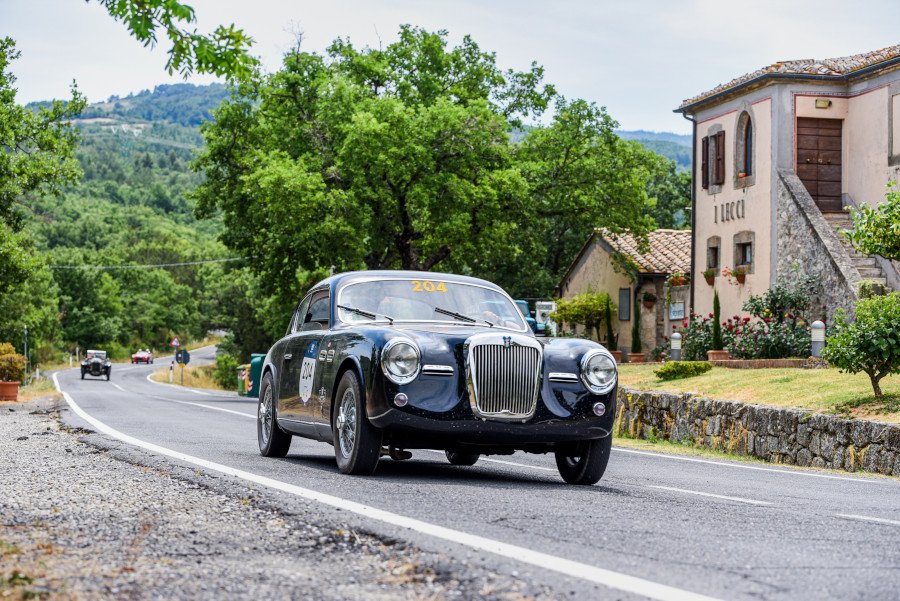 This year marked the 40th anniversary of the “modern” Mille Miglia, which as always is reserved for historic vehicles that would have been eligible in the original iteration. The route was a more conventional one this year, running clockwise from Brescia to Rome and back to Brescia, including the iconic stop in Siena where the cars gathered in the pearl of medieval architecture that is Piazza del Campo.

The current iteration of the event is  a tribute to the fiercely contested editions that took place between 1927 and 1957, with the expected break caused by WW2. Back then, it was a full-blown race, held on public roads, at racing speed. As many other events of its kind, a string of fatalities helped trigger its demise, common sense prevailing over the intoxicating magic of the competition that initially overshadowed the incredible dangers that both drivers and spectators would face. Today’s editions are decidedly less risky, but thanks to the historic nature of the entry list and the route, the scenery is largely unchanged.

To experience this from a media point of view is a rare privilege. Normally, at different car events, you don’t get to drive amongst the competitors, on the same roads. Typically you get ferried to designated spots along the way, but in the Mille Miglia, the immersion is unparalleled. Having experienced it firsthand now, I can say it made an incredible impact. My body was in a modern press car, my mind thought we were in the race. In motion, always chasing, overtaking, making new memories from of the pursuit of the past.

View our experiences at the Mille Miglia 2022